Gothaer Insurance, with 4.3 million members, increased their customer satisfaction by 8% with virtualQ solutions

An accident, storm damage to their homes, or problems with their teeth – these are all concrete concerns that customers need a quick response to when they call their insurers. These customers may have found themselves in a predicament, have worries about their health, or even be fearing for their livelihoods. Especially during such distressing times, announcements like “Thank you for waiting, you will soon be connected with an agent” can quickly frustrate or anger a caller.

Difficulty in processing customer telephone inquiries is predominantly a matter of resource scheduling at a service center. There are peak times when a large number of calls come in and there are times when call agents are significantly less busy. If enough employees are brought on board to allow every call to be immediately processed during peak times, these staff members will be underutilized during quieter periods. As such, resource scheduling becomes a dilemma. This is a customer service issue that Gothaer Health Insurance has long been familiar with. In 2017, the company therefore opted to use virtualQ, a software designed to shorten telephone hold times and simplify internal resource planning. However even Emanuel Bächli, Head of Customer and Intermediary Service at Gothaer Health Insurance, could not have foreseen just what a positive impact the software would have on its customer service work. 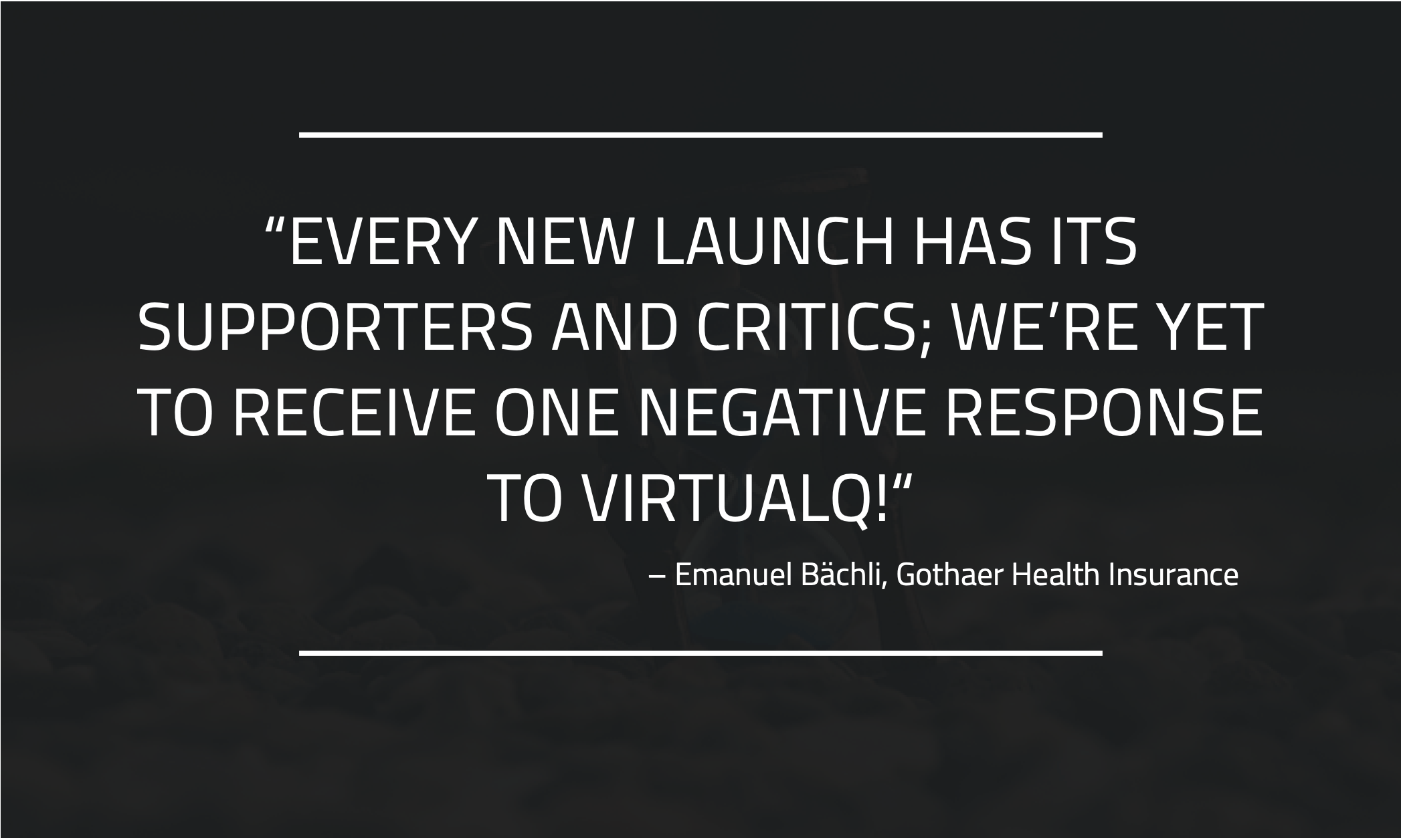 The health insurer is part of Gothaer Versicherungsbank VVaG, one of the biggest German insurance companies with around 4.3 million members and just under 5,400 employees. Gothaer’s telephone customer service answers inquiries relating to health insurance payments. A total of 40 staff members work in the health insurer’s telephone customer service, with an average of 20 to 30 agents using the phone at any one time. Call volume stands at between 1,400 and 1,500 calls a day; the average call duration – or average handling time – is four minutes; and, on record days, Gothaer Health Insurance can receive up to 3,500 calls. While the company is well equipped to handle a normal volume of calls, waits of several minutes per caller are hard to avoid during peak times. Both standard peaks, like the morning or immediately after lunch, and seasonal ones such as flu outbreaks and vacation periods, pose a challenge for resource planning in the customer service center.

The use of virtualQ has enabled Gothaer Health Insurance to minimize hold times and, in turn, considerably boost customer satisfaction. The principle behind the software is easy to explain: virtualQ does the waiting on behalf of customers, who can put the phone down and receive a notification as soon as an employee is free to assist them. There are several options available at virtualQ for the form this notification takes. If calling from a landline, the customer will be called back in the traditional way. Alternatively, they can be notified by SMS, through a specially developed web application, through the virtualQ app or via a plugin for clients’ own apps.

At Gothaer, it was decided that instead of using virtualQ for all calls, virtual waiting would only be implemented following a hold time of two minutes in order to level out peaks in the morning and after lunch. Furthermore, prior to their connection with a customer service representative, callers are asked whether their issue has already been resolved. In this way, some calls can be removed from the process altogether. The use of virtualQ therefore represents a win-win situation both for customers at Gothaer and for its employees. Callers may still have to wait a few minutes, but they can also use this time productively rather than simply sitting on hold.

Emanuel Bächli explains how the decision to choose virtualQ over any other software provider came primarily down to its technical features and compatibility with all ACD systems. “We screened many providers and looked at various solutions, but it was virtualQ that convinced us,” says Bächli. Not only the software itself, but also its technical implementation by the Stuttgart startup ran perfectly smoothly: “Implementation was very quick and the results impressed us!” Even so, expectations of the software were not initially high at Gothaer. As the service is only offered to customers who have been on hold for more than two minutes, virtualQ is made available to around 80 to 100 callers at peak times daily. “We did not think the number of callers using virtualQ would stand out in our analyses,” explains Emanuel Bächli. And yet the analyses make the impact of virtualQ clearly visible: within one year, 80,000 minutes of waiting were avoided and, as Bächli highlights, customer satisfaction – captured after every call by means of a Net Promoter Score – has “been at an all-time high since the launch.” He adds that customers especially highlighted and praised the feature that reported the current waiting time. As the topic of customer retention plays a central role in the highly competitive insurance market, such positive customer feedback is very important to Gothaer Health Insurance. “Every new launch has its supporters and critics, but we’re yet to receive one negative response to virtualQ! The software provides a nice supplementary service that is only offered in situations where it will be of benefit,” sums up Bächli.

MORE TIME – FOR CALLERS AND STAFF

Instead of wasting time on hold, callers to Gothaer Health Insurance can concentrate on something else until they are connected with the next free agent. This customer experience has been enthusiastically received not only on their part, but also at Gothaer, where virtualQ has made it possible to smooth out peaks in daily volume, simplifying resource planning and providing a more balanced workload. Another factor saving time and lowering stress for employees is the reduced follow-up time per call. This development has also been observed among other customers of virtualQ. Studies and analyses show that virtualQ reduces the duration of calls by around 5%. There are two hypotheses as to why. One is that callers feel more relaxed and happier, leading to fewer complaints. The other theory behind the increased efficiency of calls is that customers are likely to be starting conversations better prepared, having used the waiting time productively and gathered their thoughts. It comes as no surprise, then, that virtualQ has been delighting both customers and staff at Gothaer Health Insurance. Roll-out to further business divisions is now planned over the coming months. “Following the great results achieved in our health insurance division, colleagues from other areas are incredibly eager to get involved,” reveals Bächli.

Feel free to contact us if you have any questions 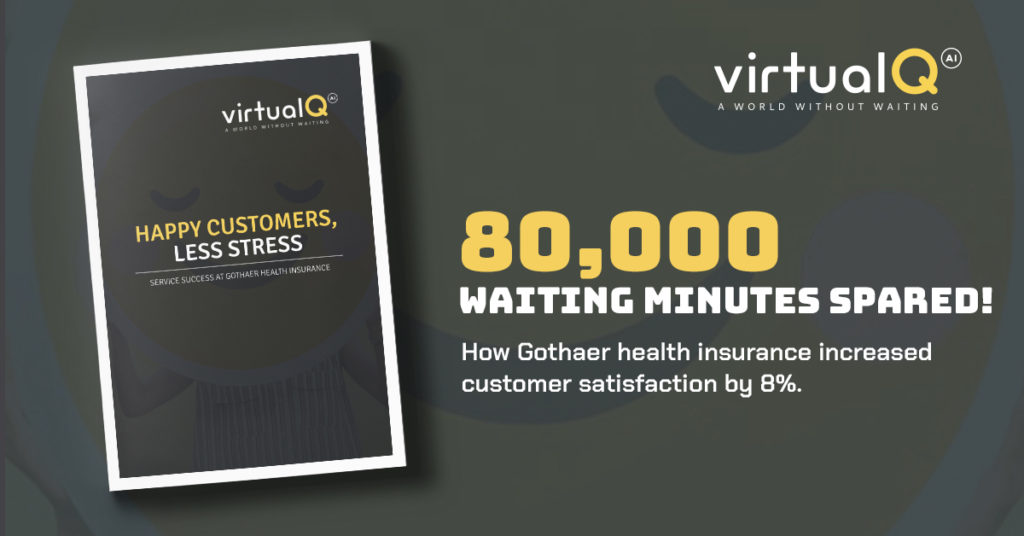 In this case study, you’ll find out how Gothaer Health Insurance, one of the biggest German insurance companies with around 4.3 million members and just under 5,400 employees, managed to increase their customer satisfaction by 8%, by simply using virtualQ’s solutions.

Gothaer’s telephone customer service answers inquiries relating to health insurance payments. A total of 40 staff members work in the health insurer’s tele- phone customer service, with an average of 20 to 30 agents using the phone at any one time. Call volume stands at between 1,400 and 1,500 calls a day; the average call duration–or average handling time (AHT)–is four minutes; and, on record days, Gothaer Health Insurance can receive up to 3,500 calls.

Find out more in our case study!